In 2005, a few months after graduating from architecture school in the Dominican Republic, Gianny Sanchez was working at a job designing houses. But she felt uninspired, and the pay wasn’t enough to be financially independent.

“I just started questioning myself,” she remembers thinking. “I wanted to be part of something bigger than me and further develop myself. I made the decision one Monday sitting at my desk, and the next Monday I was on a plane flying to New Jersey.”

Fifteen years later – after managing the design and construction of duty-free stores for an international makeup company, finishing two master’s degrees in the U.S. and giving birth to her son – Sanchez earlier this year completed a remarkable homecoming. She is the project development manager who helped bring the very first Starbucks store to the D.R. It opened mid-May in the capital, Santo Domingo.

“The first store in my country,” Sanchez says. “It was a very emotional moment for me, especially when I saw that first bag of Dominican coffee for Starbucks.”

This year, during Latinx Heritage Month, Starbucks is proud to honor the rich coffee cultures of Latin America and the stories of our partners who celebrate them still, in ways new and old, stories of families and traditions, stories of leaving home and coming back.

For Sanchez, her relationship with coffee started when she was little. Every summer, her parents would send her off from the city to experience the country life at her grandmother’s house in La Vega, in the northern more mountainous part of the country.

There, she played with her cousins – sometimes as many as 10 kids stayed the summer – embracing nature and learning about the land. On her grandmother’s property, the family grew coffee and cacao. When it was about to rain, she remembers helping pick up the coffee cherries and cacao beans that were sun drying on the big concrete platform in the backyard.

The platform was attached to an outdoor kitchen, and had a wood-burning stove in the middle called a fogón, on which the family would roast coffee during the day. Afterwards, it was ground by hand in a pilon, or mortar and pestle, and then brewed in a cloth strainer. At night, the kids would huddle together on the platform, turn off the lights and tell each other scary stories, the smell of coffee always lingering close by.

“It’s one of the best memories I have,” Sanchez says.

Sanchez, 37, grew up drinking coffee brewed in a greca, a metal stovetop pot powered by steam – resulting in coffee that’s somewhere between an espresso and a drip. Sanchez says most Dominicans prefer their coffee in small cups – black, full of sugar and accompanied by toast.

Although she lives in Miami now, when Sanchez reminisces about home, she thinks about food and music – the taste of sancocho, a Dominican meat and vegetable stew, and the rhythms of bachata and merengue.

“I miss the simplicity of life,” she says. “People work very hard there, but there’s always time to enjoy, to spend time with friends.”

Due to the COVID-19 pandemic, the Starbucks in the D.R. is now limited to delivery and pickup only, but Sanchez looks forward to the day it will be “flooded with people” who will walk inside and savor the store’s tribute to the country’s indigenous plants and birds, the warm tones and natural materials, the feminine touch that honors strong Caribbean women.

“It was bittersweet of course, leaving my country,” Sanchez says. “But for me, being able to open Starbucks there, I get to see my family, and to share this experience with them. They get to see it first hand, and I know they feel proud of me.”

Esther Salgado’s first coffee creation was a variation on a black and tan, normally a bar drink made by layering a dark beer atop a pale beer. Salgado’s version – concentrated cold brew atop apple juice – was inspired by her aunt, who ate gummy apple candies from Mexico while drinking her coffee.

“That’s where my curiosity took off. My aunt showed me that there was more to coffee than coffee and pastries,” says Salgado, 30, a Starbucks shift supervisor in Ashburn, Va. “I wanted to involve my culture. I wanted to do something different. I wanted to do experiments.”

Salgado, and a co-worker who helped perfect the recipe, introduced the black and tan at a gathering of the mid-Atlantic chapter of Hora del Café, Starbucks Latinx partner network. Over the last few years, she’s shared more and more of her coffee creations with that group, as well as at store tasting events and corporate meetings.

“I just saw it as a challenge, mixing cultures together, incorporating it with my roots,” Salgado says. “When I think of coffee, I think of family. That’s how I feel when I’m making my creations. It brings me a lot of joy to do things like that and to see people’s reactions.”

She wouldn’t have gone down this path had it not been for her sister, Sarah, 31, a Starbucks store manager at a different store in the same district. She’s the one who convinced Esther to move to Virginia from Oregon, where they were born and raised, and introduced her to Starbucks five years ago. They live together now, along with their oldest sister, Jessica.

Up to that point, Esther Salgado was more interested in computers. She’d been working for years at a company that provided phone services for prison inmates and detainees. She started off as a customer service representative but taught herself computer languages and ended up coding and programming at the company’s command center.

Sarah Salgado is equally passionate about coffee, but in a different way. She’s more interested in the lives and methods of coffee farmers, ethical sourcing practices and the bean-to-cup journey. She completed the Starbucks coffee master program and visited Hacienda Alsacia, the company’s research coffee farm in Costa Rica, where she planted her own coffee tree. She’s been with Starbucks for 13 years, starting as a barista and managing the Reserve store in Washington D.C. before moving to her current store in Virginia.

Sarah Salgado says she became aware of coffee’s role early on, especially during big family gatherings. At the end of the night, as the party wound down, coffee would be brewed in a big pan, Mexican sweet bread would appear at the table and one of the uncles would pass a small cup to each of the kids.

“It could be the roughest day, the hardest working day, the most stressful day,” Sarah Salgado says. “But having that cup of coffee, eating that bread, that family gathering, reminiscing, those were some really good times. At the end of the day, we just came together and talked. That’s coffee, that’s what it is, that’s what we do. I’m very passionate about that.”

Recently, Sarah Salgado had the opportunity to visit Iguala, a small farming community in the Mexican state of Guerrero, where her father was born. There was only one little market in town, and no Wi-Fi. Roosters woke her up in the morning. It was exciting to see her father’s roots, her roots too.

“It wasn’t easy growing up for him. He had to make a lot of big decisions as a young man,” Sarah Salgado says. “But he was able to make it. I’m grateful for everything he’s given us. I get to be able to tell his story too.”

‘The smell of home’

Narita Oliveira learned how to make cafezinho – “little coffee” in Portuguese – from her grandmother, Vovo Maria. For every cup of water, she’d use two spoons of sugar and two spoons of coffee. She’d dissolve the sugar first and put the coffee grounds in the water just before it would start to boil. Take off the heat, wait a while, then pour through a cloth strainer.

“I have her recipe, but I never met her. She died the year I was born,” says Oliveira, 41, a Starbucks partner resources manager based in Miami, who supports the Latin American Caribbean market. “But the recipe lives on. Everyone in the family still does it that same way.”

Brazil is the number one coffee exporter in the world, and Oliveira grew up in Minas Gerais, a state that produces about half the country’s coffee product. For Oliveira, memories of home mean memories of the big kitchen. She and her two older sisters would sit on the floor while her mom was cooking – talking, helping, having fun.

“A cousin arrives, then an auntie arrives, then an uncle arrives,” Oliveira remembers. “Nobody arranged that meeting, but everybody knows that there’s going to be fresh coffee around 4:30 or 5. It’s very rare to have a coffee alone, while walking on the street, like they do in the U.S. Usually, you sit for half an hour, talking with family and friends.”

Oliveira left home when she was 25 years old, to work in São Paulo and seek out more opportunities. She worked her way up in human resources, eventually running the online commerce division for a national grocery chain before joining Starbucks, where she was in charge of human resources for the Brazilian market. In 2018, she moved to the U.S. with her husband Jorge and expanded her learnings – a new set of labor laws, the different ways that American companies interviewed and hired, exposure to more diversity.

“All this learning is amazing,” Oliveira says. “It wasn’t easy, and it’s not easy, but to think about what my mom and dad built for us, and the sacrifices they made for us, here I am. It’s something I’m proud of.”

And every time she goes back to visit her parents – they still live in the same house – she wakes up and smells the familiar smells, the smell of coffee, the smell of home. 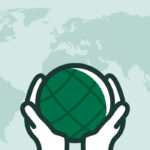 Working to create a more sustainable future of coffee for all

Write an excerpt (optional) As Starbucks turns 50, Michelle Burns, who leads coffee at Starbucks, and her team are working to ensure the best outcomes for coffee farmers and the land it’s grown on.

This is How We Celebrate Earth Day in Latin America

Starbucks Mexico contributes to the coffee community of Zongozotla, Puebla

By Starbucks México / Historias Starbucks For Herminio Ponce, a member of the Totonacapan Coffee Cooperative in Puebla, growing coffee is not only a means of livelihood, but a family tradition. “In my town it is customary to receive land when we get married. That is what happened to me, five years ago. This property […]